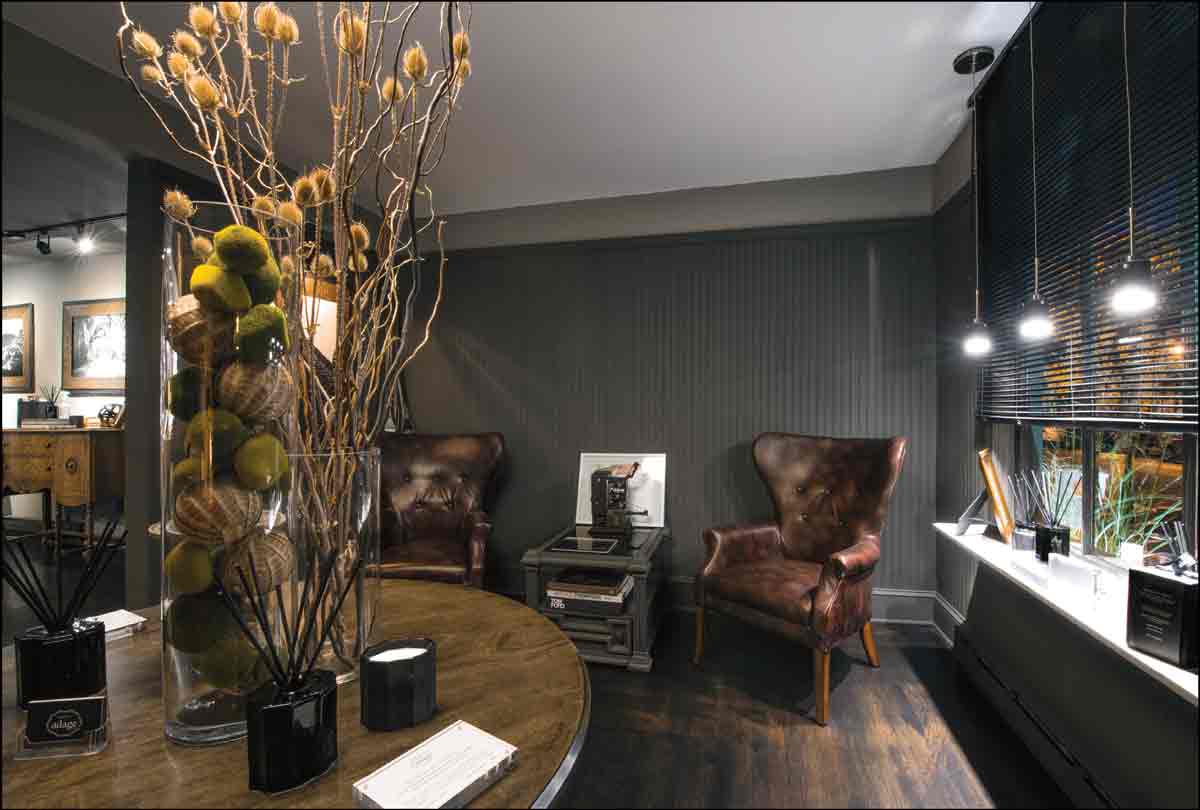 source adage, a fragrance company born out of NYC, has found its home in Hudson. When its well-traveled owners wanted to start a business, scent—a sensation that often evokes memory—seemed like a natural field to explore.

“A fragrance should transport you,” says Christopher Draghi, co-owner of source adage. “Ours pay homage to nature and to the drastically different landscapes, cultures, and people of the US.”

Christopher launched the source adage brand last September with his husband, Robert Dobay, and subtitled it “Luxury Ambient Fragrances Inspired by Great American Landscapes.” The fragrances are sold in hand-pressed, black glass vessels and offer something different to the fragrance world: scents with regional themes. It’s a smart choice for two men who love to travel and, for a time, maintained homes in both Italy and Brooklyn.

“I’m originally from northeastern Connecticut; I went to Art Center and UCLA for college and after that spent 12 years in Italy,” says Christopher. “After coming back to the US—to New York—I went to the UK, and that’s where Robert and I met. He’s from Budapest, Hungary and lived in Germany and the UK.”

After bouncing back and forth between Florence and New York for a time, legal marriage and citizenship for Robert became an option in the US. Soon after, the two took a fateful daytrip to Hudson to escape the city.

“We fell in love with Hudson immediately,” says Christopher. “We found a gorgeous Greek Revival building, bought it, renovated it, and launched our brand.” Christopher and Robert share a fascination and a gift for design—luxurious, subtle, and elegant.

The home scents they are currently marketing are gender-neutral and are intended to be a departure from a fragrance world swimming in florals.

“Our presentation and scents have a masculine look and feel, although we find many female clients who appreciate something less dainty,” says Christopher. “We designed it for ourselves, basically, as a very personal expression, and there are a lot of people we know—and in the wider world—who gravitate to the vision.”

Though both Christopher and Robert had been on the periphery of perfumery for years with Fotografica, their corporate creative design and branding business, neither were totally conversant with the laboratory side of the operation. They experimented at length and with great deliberation, however, coming up with a rough draft to present to expert perfumers who then finalized the precise formulations.

“It’s a collaboration, and sometimes it takes us to a place we hadn’t even thought of, which is fantastic. It’s been a learning curve,” says Christopher. “source adage has freed us to be creatively ourselves, and we were in the fortunate position of having access to people who could help us execute our concept while retaining our point of view.”

The scents are gender- neutral and are a departure from floral fragrances. 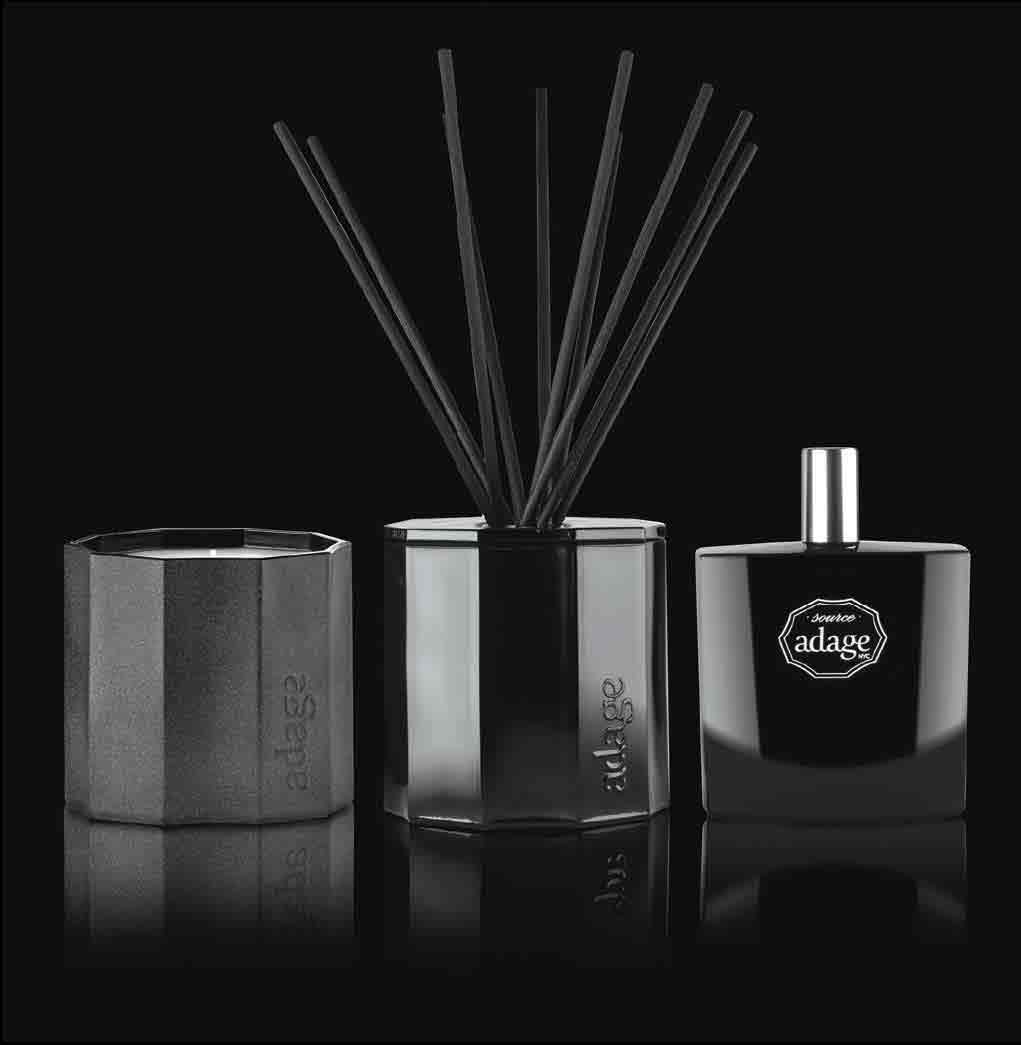 dedicated to their beloved home. All are available as reed diffusers, candles, and room sprays, and each contains blended notes characteristic of the region for which it is named. Hudson 314, for example, is composed of oak leaves, cedarwood, bittersweet wildflowers, mature orchard fruit, and musk scents.

This fall, the couple intends to launch their first two body fragrances, which will also have a strong sense of place.

“We’re starting with two bookends, very different from each other,” says Christopher. “One is much more northern and the other more southern; you might pick up a sense of mountain versus island.”

Like their ambient fragrances, these will also be gender-neutral.

“Being men, I think we tend to create fragrances that are masculine-leaning yet appeal very much to women, who also enjoy something beyond the basic floral notes,” says Christopher.

Since their fragrance brand launched in September 2015, the perfumiers have been relishing the atmosphere in Hudson’s business district.

“It’s a great fit for us,” says Christopher. “There is niche retail here that draws us the right clientele. Being in Hudson, we have a direct line to the same people we would sell to in New York or Boston, a window to the people we would be selling to in SoHo.”

If you do stop in at source adage, you will find two men who love what they do and who want you to love it too.

“To conceive of and create something, and [to] put it out there—from the products, to the shop, to the branding—is enormously gratifying” says Christopher.

“Our focus is on creating a damn fine product.”