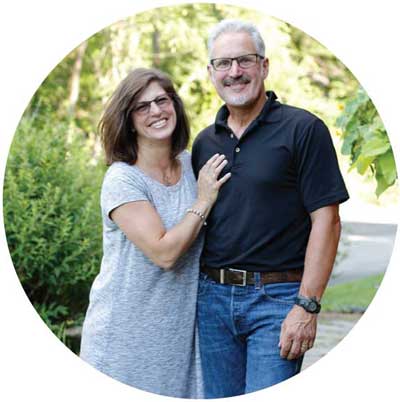 Every community needs a good place to eat and drink, one where the owner knows your kids’ names and where the cook makes a dish that you crave in the middle of the afternoon.

When this type of place closes, it usually symbolizes the emotional end of an era. But High Falls residents recently got a rare reprieve; The Spy is back, and it’s even better than before. 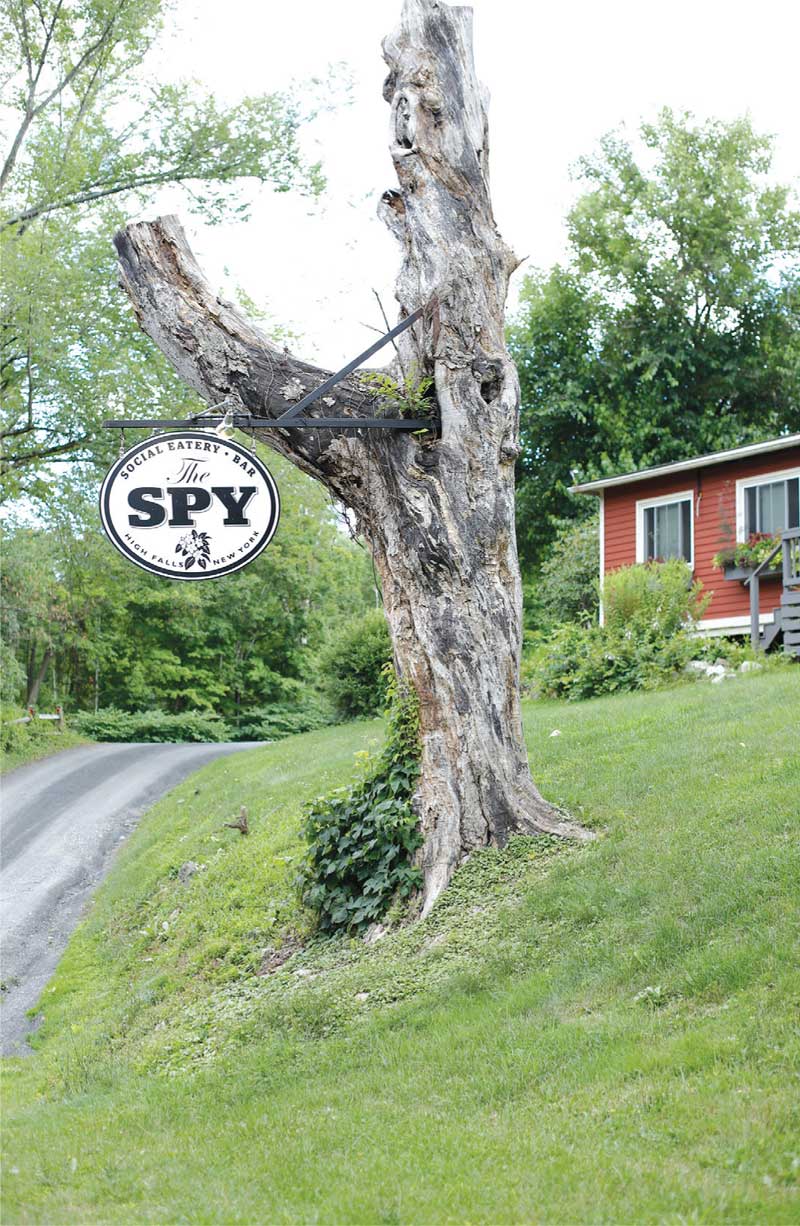 The Spy’s signature dish is still Free Range Tofu Wings, a popular recipe that George invented back in 1995. 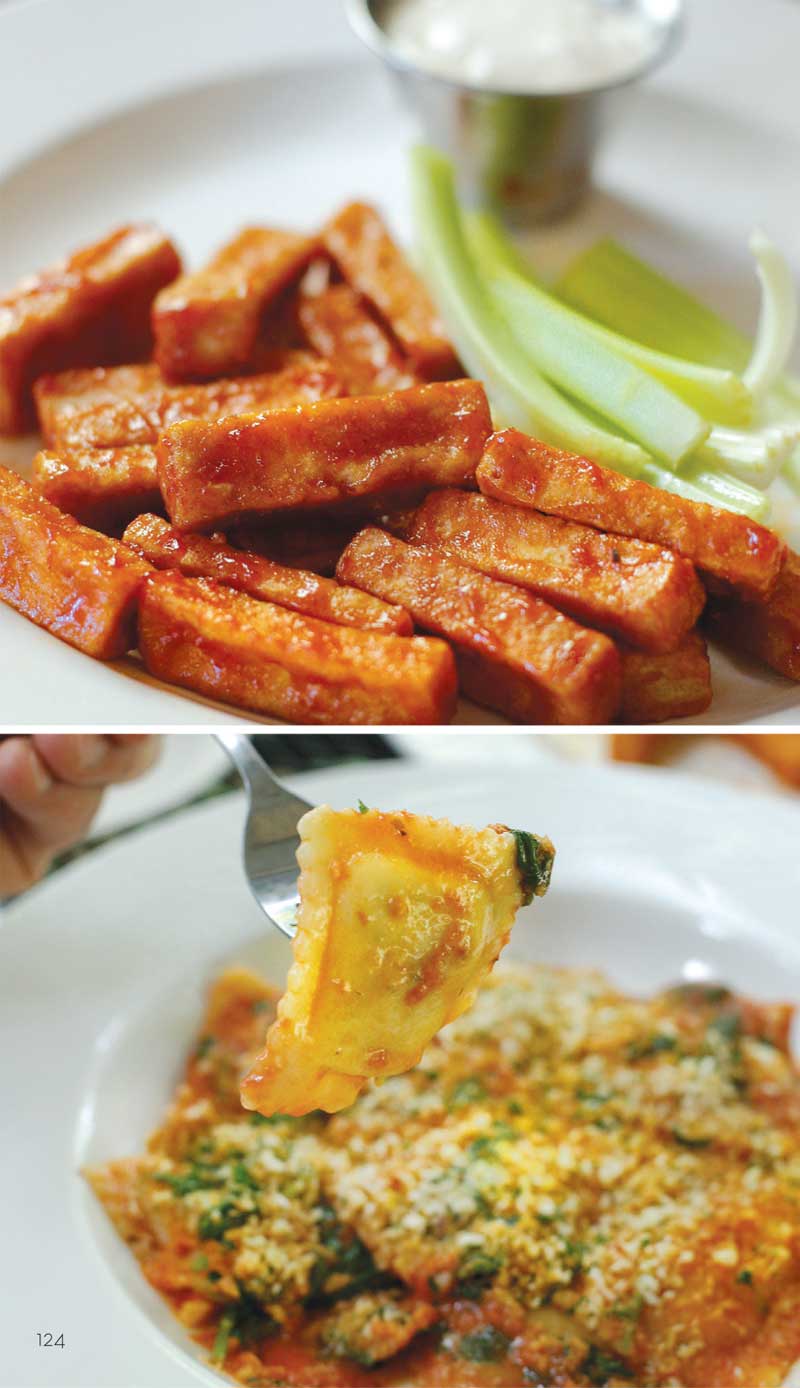 George and Brigitte Nagle originally opened their High Falls restaurant in 1993 as the Northern Spy Café, named for an heirloom apple variety. After a twenty-year run, they turned the location over to other hands for a couple of years due to a health hiccup, but the Nagles were happy to dive back in once those hands were unable to continue caring for their beloved café. They had missed The Spy, and High Falls had missed them.

“We reopened in May, and it’s been great ever since,” says George. “When people come in and realize we’re back, the first thing they say is that they’re so happy.”

The café had been very social, so the Nagles renamed it The Spy Social Eatery and Bar. They also changed the logo to an apple blossom to symbolize rebirth.

“We liked the name ‘Northern Spy’ because it had a little mystique, but then for 20 years people were calling it ‘The Spy’ anyway,” says George.

This go-around, they invited chef Jonathan Santiago, a graduate of the Culinary Institute, into their kitchen. Jonathan has worked at A Tavola in New Paltz as well as at New World Home Cooking and Diamond Mills in Saugerties.

“We pretty much give him free rein,” says George. “The menu has changed a couple of times as a result. He’s come up with beautiful new items.”

The basic formula is still what made The Spy a hit for two decades: delectable new American food served in a comfy setting with a warm welcome.

It’s a place where, as a reviewer noted online, you can dress up and enjoy a special meal or stop in fresh from work for a beer—and have a perfect experience either way. 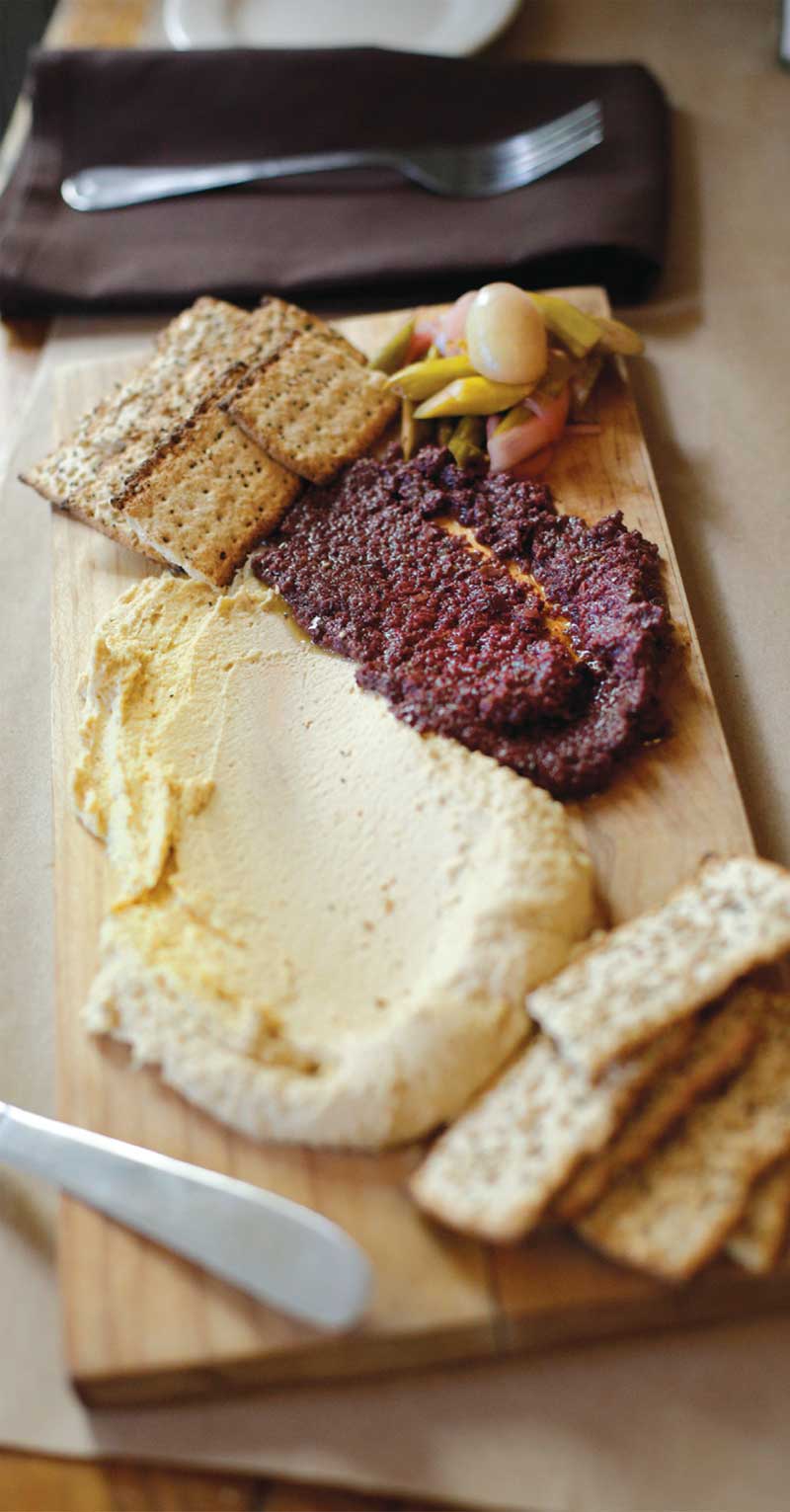 The Spy’s signature dish is still Free Range Tofu Wings, a popular recipe that George invented back in 1995. “We deep fry them ‘till they’re just a little bit crispy, toss them with buffalo wing sauce, and believe it or not, everyone—from dainty vegans to burly carnivores—comes back for more,” George says. He tends bar as one of his many roles in the establishment. George also considers himself “plumber, electrician, stock boy, menu development, and beverage development.”

Brigitte warmly welcomes guests on Thursday, Friday, and Saturday nights, in addition to teaching social studies at Margaretville High School. Growing up on Long Island, George was always drawn to food and hospitality. At age 17, his first job was in a wine and cheese bar.

After graduating from New York Technical College with a degree in hotel and restaurant management, he went on to work at Harry’s Bar in Venice and manage the food company at

Bloomingdale’s. He even ventured to California to work in gourmet import and export before heading back to New York to help Cipriani, the parent company of Harry’s Bar, open Harry Cipriani on Central Park South. All along, though, George dreamed of doing it his own way one day.

“I think everyone who is serious about this business wants to put their own stamp on a place,” he says.

George’s upstate odyssey started in the late 70s with ski weekends and a share in a Catskills house; ten years later, he moved to Phoenicia full-time and met a lovely young woman from Krumville. When the perfect location became available for his restaurant, George decided it was time to make his dream real.

High Falls has long been a wonderful place for restaurants, thanks to landmarks like John Novi’s Canal House and Richard Murphy’s Egg’s Nest, both closed now

“Most of all, I’d just like to say a huge thank you to the community for coming back,” George says. “I don’t think we’d fully realized how loved we were.” 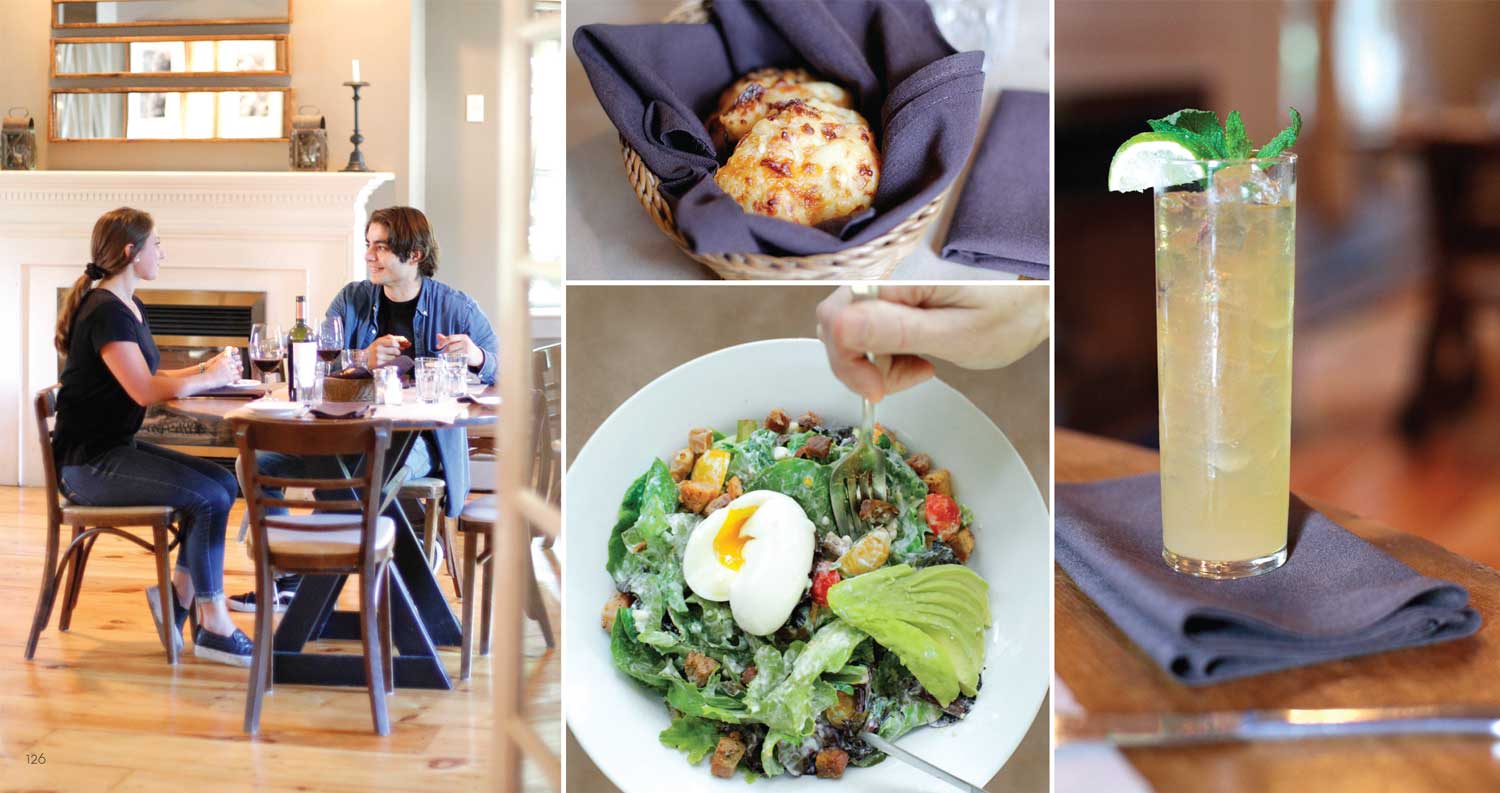 after decades-long starring roles in the regional food scene.

“Those guys and realtor Mary Collins, they built this tiny hamlet as a destination,” George says. “And the access to local ingredients is great.”

The Nagles buy greens that are grown a mile down the road, and they get many supplies from the Davenports, plus rye lager from Arrowwood Brewery in Accord. From the beginning, comfort, relaxation, and good food have ruled.

“The building has a homey farmhouse vibe,” says George, “and we tried to build on that with the color scheme, decor, and the screened-in porch; we tried to make it just warm, welcoming, and comfy.”

Their kids—now 35, 33, and 24 years old—all pitched in, working their way through washing dishes and bussing tables to all of the various responsibilities that come with the business. But the three Nagle kids aren’t the only young folks to learn at The Spy.

“We had three kids from the same family; their parents thanked us for helping raise them, which I hadn’t really realized we were doing,” says George. “Thinking back, though, we had kids work for us for ten years, working their way up, coming back to work on school breaks, launching out into the world.” To the Nagles, being back at their café feels right, and they love the community and their customers.

“We get a great mix, from locals who’ve been here for generations—the teachers, contractors, carpenters, nurses—to the second home owners, tourists, and weekenders,” George says, “and we’ve become true frie

But there’s something George really wants them all to know. “Most of all, I’d just like to say a huge thank you to the community for coming back,” he says. “I don’t think we’d fully realized how loved we were.” 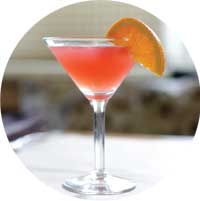