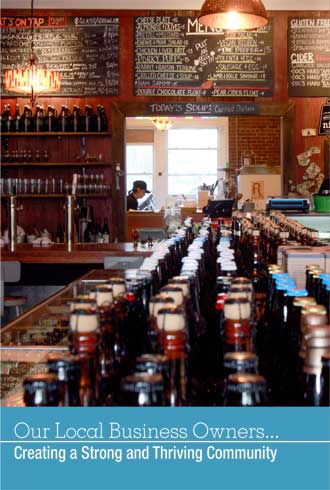 Let’s Go to…
The Hop

Top notch, outstanding, and as good as it gets -those are the kind of things people say about The Hop, the cozy place that has taken Beacon and the Hudson Valley by storm. Reviewers from DC and Brooklyn and Manhattan rave about how they wish there was a place just like it in their hometown. The combination of fine brews, artisanal eats, and lively welcome has people falling deeply and madly in love.

Maybe that’s because “hipster,” in this instan-
ce, is not just a façade but a literal reality with depth. The “hip” in The Hop has to do with quality and knowledge and warmth, things that transcend trend. After all, how may purveyors of eats and libations have literally changed the face of local agriculture? That happened at The Hop when a botanist named Justin Riccobono fell in love with the place and its hop-themed décor. He got curious about the plant, and from that seed was born Dutchess Hops, the first commercial hop farm in the Hudson Valley. 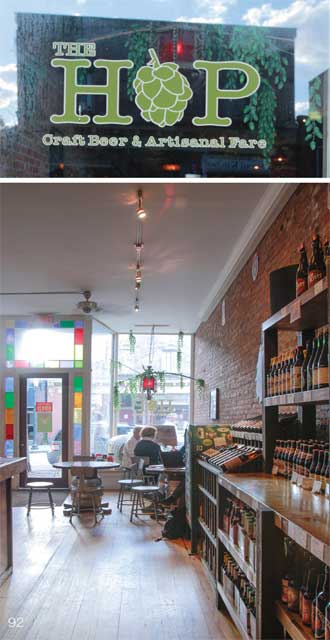 Owner John Kelly studied psychology in college and worked in the field for a few years. But his true love was fine food-arguably a more reliable and direct route to happiness than psychology is able to offer-and when he decided to chuck it and go to the Culinary Institute, the stars began lining up to craft a very special addition to Beacon’s Main Street.

“I waited tables through college,” says Kelly.” After I grew tired of what I was doing, I decided to go to the Culinary Institute of America so I could pursue my dream of owning my own place. I cooked in kitchens for a bit before opening the Hop with my friends Matt Hutchins and Chris Kavanagh.” That was in March of 2012, and the moment was ripe for something fresh and artisanal.

Is it a craft beer mart?
A gastropub? Kelly defines his baby as “a craft beer and artisanal-fare tasting room.”

Reviewers, as noted, overwhelmingly love the place, with most giving it a solid five stars and many sounding as though they wished there were more stars to be given. But there seems to be a tad bit of confusion about what, exactly, The Hop is. Is it a craft beer mart? A gastropub? Kelly defines his baby as “a craft beer and artisanal-fare tasting room. You can come to shop for beer to go, taste beers while you’re here, have a pint and some food with friends, and just relax.”

Comfort food like grilled cheese and hearty soup, a standout vegan Reuben, and small-plate treats like porky puffs, fine cheeses, and artisanal pickles - along with a scholarly selection of brews - have the place flooded on weekends, and the guys don’t take that for granted. “People these days are really getting into craft beer and everyone seems to be a gastronome in some fashion,” notes Kelly. “Customers tend to tell us what they like and thus determine the food and beer menu at times. A good example is pumpkin beer. It’s not my favorite, but everyone else loves it, so we do our best to bring in the best offerings. Matt also likes to be creative in the kitchen, but nothing beats a grilled cheese and soup on a rainy cold day.”

A combination of personalities also has people coming back for more; along with the food, people rave about the welcome and the savvy service. (“His face lit up,” writes one reviewer about asking his server for some beer information.) “We have the single greatest group of individuals I've ever worked with here at The Hop. I try to let everyone be self-directed and take pride in his/her work. When you allow great personalities to be themselves, they tend to bring their best to the table and make the whole group and space better,” says Kelly.

And being part of the growing locavore and local brewing scene, he says, is a treat in itself. “Networking is important. Competition is important. But cooperation is most important. The beer world has a culture of cooperation which makes craft beer so successful.” 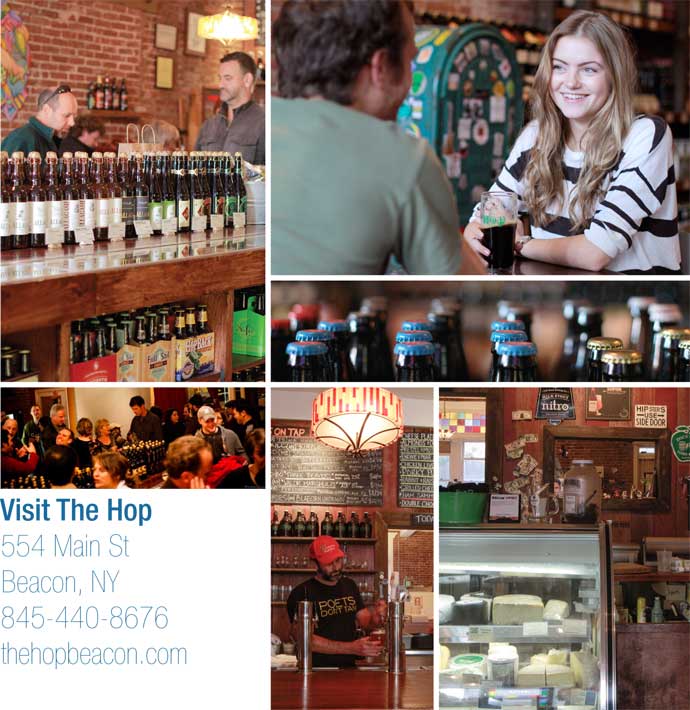 He’s constantly researching and listening for the newest and the best.

Even for people with a smash hit on their hands, today’s economy can serve up rough patches. “Last winter was tough,” says Kelly frankly. “A short holiday season and bad weather hurt everyone, I think the only real critique one has every heard about The Hop is that there could be a bit more seating and more room-and in keeping with the overall theme of staying responsive, that problem was resolved as of November 8. That was opening day for The Hop’s new space at 554 Main Street. From there, it seems likely, the sky is the limit.

Talent and taste liberally seasoned with passion would seem to be the right recipe for Beacon’s main drag. In opting out of the mental health “industry,” Kelly has clearly chosen a path that ministers to the happiness of many and brings him enormous fulfillment.

What’s his absolute favorite thing about work? “Giving people a comfortable and friendly place to go and enjoy themselves,” he says. “And a place where everyone can learn about what we love . . . beer!”