Although ice yachting (or ice sailing/boating) started in Europe, by 1790 it was quite a popular winter activity in the Hudson River Valley with Dutchess County’s Poughkeepsie becoming the center of the sport by the mid-1800s. Further bonding of the Hudson Valley with this winter pastime came from the fact that early iceboats were originally built in 1790 by Oliver Booth of Poughkeepsie. This type of craft was thought to be a catalyst, launching the recreational iceboat evolution for the entire nation. 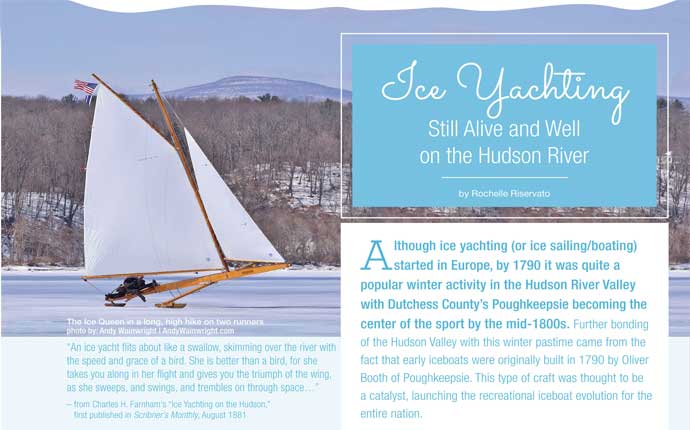 “An ice yacht flits about like a swallow, skimming over the river with the speed and grace of a bird. She is better than a bird, for she takes you along in her flight and gives you the triumph of the wing, as she sweeps, and swings, and trembles on through space…”
– from Charles H. Farnham’s “Ice Yachting on the Hudson,”
first published in Scribner’s Monthly, August 1881.

The term “yachting” may lead one to believe it was exclusively a sport for the wealthy; however, quite the opposite is true. Initially, it was a sport for regular sea-faring folk. The 18th century was an era when many already had their own boats and used them for fishing, transportation, and leisure. These folks extended their boats' season by adding ice boating to the mix, allowing them to get out and enjoy the mighty frozen Hudson even on the coldest days. 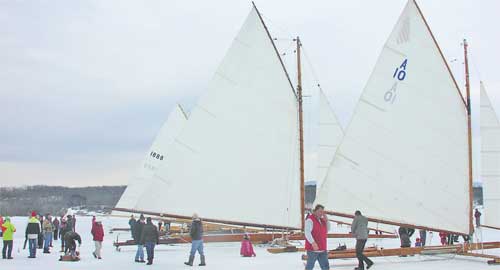 By the 1850s with boats becoming more sophisticated, ice yacht clubs were formed in Newburgh, New Hamburg, Poughkeepsie, and Hyde Park, with much competition between these group members. There were competition awards up for grabs—among them being the Ice Yacht Challenge Pennant of America and the Captain William Drake Flag. Oddly enough, boats even raced against trains along the Hudson; in 1871 the famous boat Icicle, built by FDR’s uncle, John E. Roosevelt, beat the Chicago Express as it traveled from Poughkeepsie to Ossining. In the latter part of the 19th century, ice yachting was in full sail with yacht clubs increasing their registered members. However, the Hudson Valley’s interest faded out during and after World War I, with only a slight revival during the 1960s.

Fast forward to the 21st century. Although popularity had, once more, dwindled over the last half century, some dedicated sailors still hit the ice. Rhinebeck resident and member of the Hudson River Yachting Club (organized in 1885), John Sperr notes that sailing on ice is a whole other sport than sailing on water because wind and temperature elements are more demanding on the former. And then there’s always the battle with the cold that some may not look kindly upon. Frigid mercury readings require more preparation and stamina for folks that may not relish tolerating 20-degree temperatures for many hours. However, for those who delight in the sport, Sperr says, “the heat of competition keeps them warm.”

“There is something incredibly seductive about gliding across the ice of Tivoli Bay with just the soft rush of the wind in your face, the creak of the rigging, and the clatter of the runners on the ice.”

Already short-seasoned, winter weather conditions can further diminish ice-sailing time. Snow amounts, rain totals, wind velocity, and water sedimentation all factor into how long and how ideal any winter will be for the sport.

Mother Nature holds the cards when it comes to adding frustrations and obstacles—or upping the ante and lowering the temperatures for a great season! Nevertheless, there are always those who wait, weather-watch, hope, and pray for those perfect times … even if there’s just one or two days during the entire season they can enjoy this most daunting, adventurous sport. After all, as Sperr reminds us in a quote from an area publication: “There is something incredibly seductive about gliding across the ice of Tivoli Bay with just the soft rush of the wind in your face, the creak of the rigging, and the clatter of the runners on the ice.”

Although there’s no official website for the Hudson River Ice Yacht Club, Speer has a personal site at HRIYC.org where he says the site has been "a consistent source that people frequent to get information about what is happening on the ice in the winter.” Although the site provides useful information for enthusiasts, Speer wants to be certain folks know his site is “unofficial.” Says Speer, “During the season, I try and update my page as the activity dictates—often twice a day—because when things get going, people are clamoring for the latest information.” 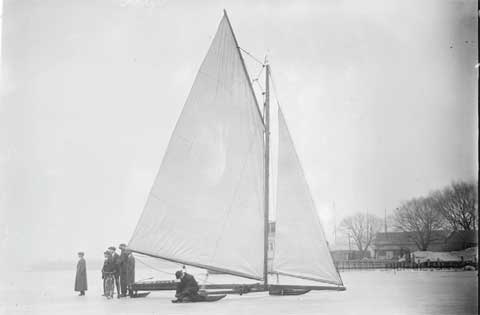 Due to the obvious reasons of unpredictable weather conditions, Speer explains that when it comes to Hudson River Valley iceboating, “it is impossible to plan or schedule any events in advance. The huge variations in winter weather here never give us any certainty of having a good sheet of ice for sailing. When it does happen, such as last winter, the word spreads quickly and people find their way to ice.” He adds, “We give free rides to the willing when the conditions are right—you just have to be there when it is happening. We need the right temperature, smooth ice free of snow and of a safe thickness, and just the right amount of wind—a very fickle combination.”

Another source of local information is available on an independent blog maintained by Brian Reid, a fellow member and secretary and unofficial historian of the Hudson River Ice Yacht Club. Reid owns two classic stern-steering iceboats and his blog has a plethora of information featuring the history of the antique, stern-steering, gaff-rigged ice yachts of the Hudson River Valley, as well as a pictorially beautiful archive of boats, races, stories, and historic articles on ice yachting. The blog is at hudsonrivericeyachting.blogspot.com, where one can see photos of recent iceboating adventures—the latest being from March 2014. Reid’s blog quote states that the March 2014 spectacle “was truly the largest gathering of iceboats I've seen on the Hudson River in the history of the club.”

At the 2014 Woodstock Film Festival, a film called Against the Wind, directed by Tomasz Gubernat and Christopher Nostrand, was shown in the screening repertoire. The film was described as such: Against the Wind followed a handful of practitioners of the almost forgotten sport as they take advantage of one of the coldest winters the Hudson River Valley has seen in decades. These yachters are intent on taking full advantage of one of the deepest, longest ice sheets on the Hudson in years, knowing they might not see anything like that again—anytime soon.”

HIKE the diverse grounds of Mohonk

The Medicine of Nature

10 Must Do’s This Winter