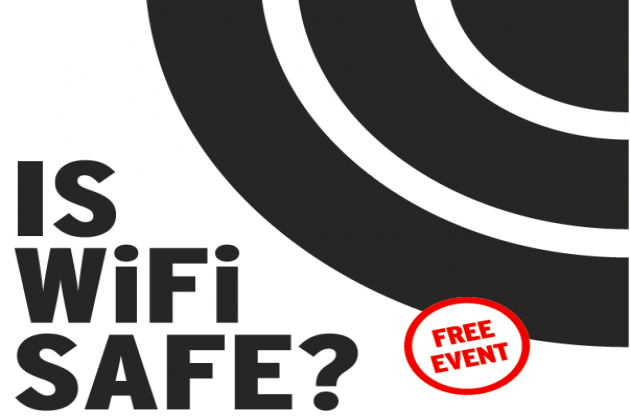 The Woodstock Library Symposium on Wi-Fi (WLSWF) will be held on November 21, 2014 at the Woodstock Primary School, 8 West Hurley Road
Woodstock, NY 12498, USA. The doors will open at 6:30pm and the panel discussion will begin at 7:00 pm. The Symposium will feature such expert scientists as Dr. David O. Carpenter, Director, Institute for Health and the Environment, University at Albany; Martin Blank, Ph.D., Special Lecturer in the Department of Physiology and Cellular Biophysics at Columbia University; and Michael McCawley, Ph.D., Interim Chair of the Department of Occupational and Environmental Health Sciences at the University of West Virginia School of Public Health. The panel moderator will be Kathleen Nolan. Dr. Nolan received her medical degree in pediatrics from Yale University. This free event is sponsored by The Friends of the Library, the Golden Notebook, Into the North Woods Learning Center, and Chronogram.

Wi-Fi is a trademark name and is a play on the audiofile term, Hi-Fi. It is a local area wireless technology that allows electronic devices to exchange data or connect to the Internet using 2.4 GHz UHF and 5 GHz SHF radio waves. The Wi-Fi Alliance defines Wi-Fi as any “wireless local network (WLAN) products that are based on the Institute of Electrical and Electronic Engineers (IEEE) 802.11 standards.” Many devices use Wi-Fi and they include personal computers, video-game consoles, smart phones, tablet computers and digital audio players. These can connect to a network resource like the Internet via a wireless network access point. Such an access point (or hotspot) has a range of about 66 feet indoors and greater range outdoors.

Woodstock Library Wi-Fi Taskforce was convened after a group of citizens approached the Library about their concerns about Wi-Fi. The library is actively courting full public engagement on this issue by encouraging patrons to research the subject via their Wi-Fi resources shelf at the library. Further, all interested citizens are invited to send their questions to Amy Raff, Library Director: amy[at]woodstock.org. The questions will be compiled and forwarded to Kathy Nolan, the symposium moderator, for discussion by the panel.

Library Director Amy Raff explained how the symposium came about. “For years the Library has provided 24 hour open access to the internet over its Wi-Fi network,” she explained. “Last winter,” she continued, “a group of concerned citizens approached the Woodstock Library regarding their belief that Wi-Fi radiation has a negative health effect on people, especially children and pregnant women. Since this is a changing area of public health the Library is sponsoring a symposium to explore the present thinking of scientists in the field.”

“It has been an uplifting experience to work with Amy, Stuart and the members of the Library board on creating a symposium which will address a broad spectrum of views, opinions and scientific evidence concerning Wi-Fi, electromagnetic frequency (EMF) and electromagnetic radiation (EMR). As a life long teacher, my greatest concern is for the safety and optimal nurturance of children. Until we have long term, peer reviewed, studies that prove Wi-Fi does not present a danger to the developing bodies and minds of children, I believe we should be embracing a precautionary approach. Many people are not aware that the current standards for exposure to EMF and EMR are based solely on adult studies. Common sense tells us that an environmental factor that may be safe for a 175 pound adult male may not be harmless for a 45 pound 5 or 6 year old. This symposium is designed to be a venue in which our community can come together with some of the foremost scientific experts in this field and have a conversation! What better way to become informed!” Catherine Sklarsky, Director, In the North Woods Learning Center.

About the Woodstock Library:

The Woodstock Library was founded in 1913 and today has holdings of over 60,757 books and materials. It sponsors 13, 283 public programs and boasts a circulation of over 100,000 items. In addition, it is supported by an elected board of directors and the Friends of the Library, a 501c3 organization.

Martin Blank, Ph.D., is currently a Special Lecturer in the Department of Physiology and Cellular Biophysics at Columbia University. From 1968 to 2011, as an associate professor at Columbia, he published over 200 papers on the biological effects of EMF. His book, Overpowered: What Science Tells Us About the Dangers of Cell Phones and Other Wi-Fi Devices, was published in 2014.

Dr. David O. Carpenter is a public health physician who directs the Institute for Health and the Environment, a Collaborating Center of the World Health Organization at the University of Albany’s School of Public Health. He has authored 370 peer-reviewed publications and 6 books, and he co-edited The Bioinitiative Report in 20012. He counsels prudent use of Wi-Fi and wiring rather than Wi-Fi in schools for children.

Michael McCawley, Ph.D., is the Interim Chair of the Department of Occupational and Environmental Health Sciences at the University of West Virginia School of Public Health. Dr. McCawley spent over 27 years as a Public Health Service Officer with the Centers for Disease Control and Prevention, studying and reporting on his research concerning occupational respiratory disease. Surveying the scientific evidence thus far, Dr. McCawley does not think Wi-Fi poses a health danger.

Kathy Nolan has training in pediatrics, research study design and bioethics. She currently works as Regional Director for the High Peaks from the Woodstock office of the Catskill Mountain Keeper. She will moderate the discussion.