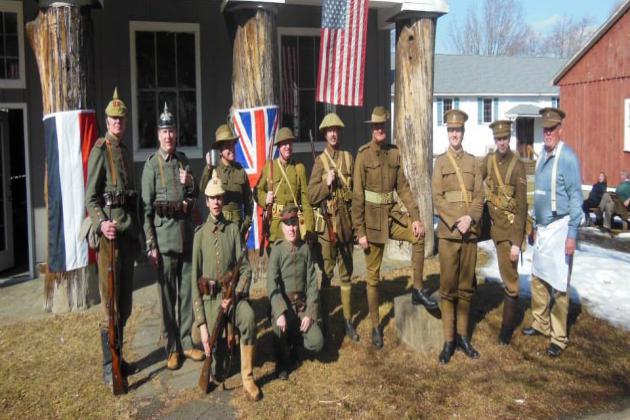 Museum Village will host a commemoration to the 100th Anniversary of the beginning of World War I. Also known as the First World War and the Great War, this global conflict started on July 28, 1914 and lasted until November 11, 1918. The United States joined the conflict on April 6, 1917 and played a major part in ending the war. More than 9 million soldiers were killed and 21 million wounded. In addition, civilian casualties associated with the war numbered nearly 10 million.

Living historians representing seven nations involved in the conflict will be on hand to demonstrate military life. There will be displays of original uniforms and items from the war. In addition, there will be a canning demonstration to highlight the work of the women of the Orange County Food Battalion, a lecture on the evolution of chemical warfare, a lecture on zeppelins in combat and knitting demonstrations.

The Gift Shop will be open and Coffee & Hot Chocolate will be available in the Visitors' Center.

Museum Village is a living history museum preserving a vast collection of eclectic, 19th century artifacts for educational purposes. Using these artifacts and reproductions, we provide hands-on experiences and exhibits illustrating the transition from a rural to an industrial culture and economy in America, provoking thought and discussion about history. www.museumvillage.org