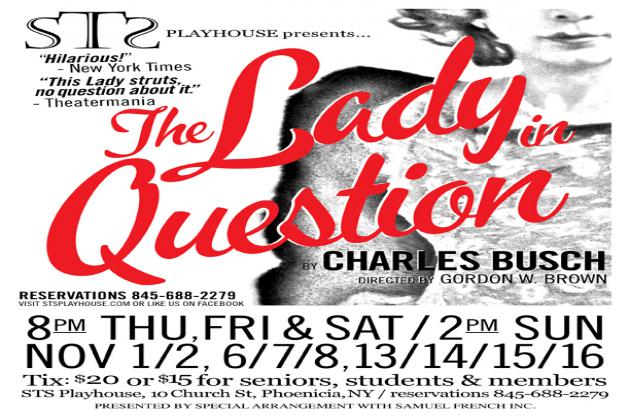 "The Lady in Question” has every lovable old cliché from 1940’s movie history, sent up with the flamboyance of a Fourth of July rocket." Stearns, USA Today

“...this Lady struts -- no question about it.” Theatremania

The Lady in Question was originally produced by the WPA Theatre, Kyle Renick, Artistic Director, and is presented by special arrangement with Samuel French, Inc.

The Lady in Question, written by Charles Busch is a freewheeling satire of patriotic 1940’s thrillers such as “Notorious” and “Escape.” The suspense builds when the glamorous Gertrude Garnet, world renowned concert pianist, arrives in Nazi Germany to perform a concert. Unbeknownst to Gertrude, her host, the Baron who has fallen deeply in love with her, is holding an equally famous actress captive in the tunnels beneath his chalet in the Alps. Gertrude then becomes enamored with a handsome American visitor who is searching for the captive, his mother. When Gertrude becomes aware of the prisoner she overcomes her colossal self-absorption and reluctantly agrees to help with the escape..

The Lady in Question is directed and designed by Gordon W. Brown, assisted by production stage manager Alisa Brown and features Jay Braman, Adele Calcavecchio, Ann Davies, Jake Haisley, Roger Karz, Ally Smith, Nat Thomas, Morgan Thrapp, Richard Quinn, and Chris Bick in the title role. STS has cast the role of Gertrude as Charles Busch would have, a male playing female. In the tradition of Theatre in Limbo, the director has taken advantage of cross gender and double casting leaving you wondering, "Who is the lady in question?"

STS Playhouse was founded in 1976 and has mounted over 70 full-scale productions. The building that STS currently calls home was built in 1887 by the International Order of Odd Fellows and is now a charming, fully air-conditioned 150-seat theater.