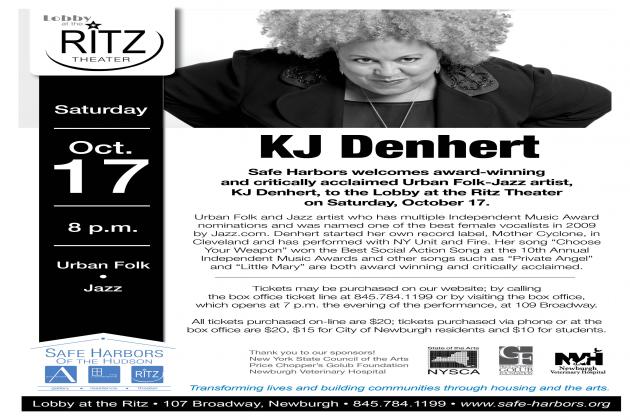 Safe Harbors’ welcomes KJ Denhert, an Urban Folk/Jazz artist who has multiple Independent Music Award nominations, to the Lobby at the Ritz Theater on Saturday, October 17 at 8 p.m. KJ Denhert has earned multiple Independent Music Award nominations and was named one of the best female vocalists in 2009 by Jazz.com. Denhert started her own record label, Mother Cyclone, in Cleveland and has performed with NY Unit and Fire. Her song “Choose Your Weapon” won the Best Social Action Song at the 10th Annual Independent Music Awards and other songs such as “Private Angel” and “Little Mary” are both award winning and critically acclaimed.
Tickets may be purchased on our website; by calling the box office ticket line at 845.784.1199 or by visiting the box office, which opens at 7 p.m. the evening of the performance, at 109 Broadway.
All tickets purchased on-line are $20; tickets purchased via phone or at the box office are $20, $15 for City of Newburgh residents and $10 for students.